Are you 100% honest with your spouse about everything you spend and save? If you said no, you’re not alone. Statistics show only 52% of individuals believe their partner is honest about money with them. The truth is, this is financial infidelity.

Whether your lies seem major or minor to you doesn’t matter, the deception is the same. The good news is, we are finally starting to understand how financial infidelity affects marriages. You and your spouse need to see the full picture of what’s going on in your relationship. Becoming familiar with it will help you to stop it before it becomes a runaway train.

What is Financial Infidelity?

That means if you’re sneaking a coffee from the drive-through every morning when you told your spouse it’s only happening once a week or spending thousands on a credit card every month, you’re still committing financial infidelity.

Make no mistake, this can hurt as much, if not worse than, romantic infidelity. The emotional cost of the deception is more devastating than the monetary cost. You can always figure out how to recover from overspending, or save more, and you can always fix money mistakes if you’re willing to put the effort in. It requires a very different approach to recover from the loss of trust.

We know a couple who ended up divorced after the wife discovered her husband had run up tens of thousands of dollars in debt on a secret credit card. Even though it was a big financial setback, it wasn’t the debt that pushed her to leave him. It was always about their trust, partnership, and relationship, never about the money.

Truthfully, everyone has it on some level. It’s not always this big, horrible secret that ruins everything. In most cases, it’s pretty innocent. Saying you spent $50 on an outfit that was $100. Spending when you said you wouldn’t. These are untruthful statements about the money you spent, whether it’s intentional or not.

The good news is that we truly believe that it doesn’t matter how harshly the financial infidelity impacted your relationship, you can rebuild the life you want together. It’s going to take some serious work, vulnerability, and accountability, but you can recover.

Trying to sort through all of this alone can feel daunting; where do you even start? We’ve designed a tool called the Financial Infidelity Scale (FIS). Couples use it to measure the amount of financial infidelity in their relationship. Acknowledging what’s happening in your marriage is the first step on the path to fixing it.

How Does Financial Infidelity Show Up in a Relationship?

Money issues end 22% of all marriages in North America. There are lots of ways you can stay in financial shape together to steer clear of that path, and they all start with recognizing how financial infidelity presents itself.

You may only spot one of these types in your marriage, or maybe you have two or three. Once you see them, you can start to dig deeper and find the root of the problem. Is it fear, guilt, shame, or control? Talk to your partner without judgment, there is always something deeper going on.

The real problem is making separate financial decisions without involving your spouse. When you want separation for the sake of secrecy or security, when you have separate credit cards because you don’t want your partner to know, you’re in the weeds of financial infidelity.

There is a situation for every Money Personality to get sucked into the trap of financial separation. For example, Savers like to know they have a little cushion, and Spenders like to have liquid funds they can access quickly. The overarching thing that ties all of these behaviors together, is not trusting your spouse to meet your needs when it comes to money. This leads to dishonesty, even in the smallest forms.

Overspending and racking up credit card debt are a real problem. In fact, it’s one of the most common ways financial infidelity presents itself in relationships. You’d be hard-pressed to find another couple that doesn’t have a story of spending more than they said they would or having debt their partner might not know about.

The need for the latest and greatest, or for that cool new tool that does exactly what you’ve been needing pushes us to spend, spend, spend. Social media shows us the lifestyle we “should” have, and keeping up with the Joneses ratchets up the pressure. Many couples are afraid to honestly talk about money, and as the problem starts to spiral out of control, the fear of exposure and shame about what’s done only makes keeping the secret seem more necessary.

But overspending and hidden debt keep a permanent rift between partners. It’s imperative to let your partner know what’s being spent. And listen, we aren’t perfect as human beings. We will all make mistakes. But staying honest will keep us from turning a mistake into a divorce.

When couples don’t know what’s coming into their accounts or what needs to be paid, it makes for a very messy situation that is ripe for financial infidelity. It’s much easier to keep a financial transaction secret when only one of you is keeping tabs on the bank account, or when someone can hide a credit card statement.

Be mindful of planning for longer financial goals and possible future emergencies. Building fun and security into your budget is important to keep you on track with each other.

When one partner has more control over money than the other, they’re committing financial infidelity.

Maybe you have secret credit cards because you don’t like feeling controlled by someone else. Or perhaps a secret account because you don’t trust your partner with money. Women have reported having secret credit cards because their husbands kept such tight control of the finances, and had unrealistic ideas of what the true cost is to run a household.

Both the partner that’s controlling the money and the one being controlled, tend to hoard and hide money from the other. This deeply hurts the trust between you and your spouse.

As we’ve said, even the smallest thing, like a daily coffee your partner doesn’t know about, counts as a money secret. Hiding purchases, hiding credit cards, hiding bank accounts, all of these are money secrets you’re keeping from your partner. At some point, all of the money secrets come out. It’s inevitable. But it’s better for you to rip the band-aid off and confess to your spouse than it is to let it grow and grow and have your partner find out the hard way.

We know a woman whose husband became addicted to pain medication after an injury. He hid it from his wife, including the cash he was draining from their account. She did not find out from him directly, only when the car was being repossessed and they were being removed from their home.

You don’t want that to be you. Marriages don’t usually recover from that point (though hers did – so it is possible).

The secrets that are the most harmful are the ones that are intentionally hurtful. A partner who is very deliberately lying, racking up debt, and having complete control over the finances are the things that push marriages to their breaking point.

We know that recognizing financial infidelity is not always easy. Usually, you only see the signs as you look back. The Financial Infidelity Scale will help you catch them now before they spiral. And hopefully, before it gets to the point where you can no longer afford to keep it hidden. We truly believe that no matter how far the financial infidelity has gotten in your relationship, it can be healed.

Check out The Financial Infidelity Scale HERE and get started on the roadmap to healing TODAY. 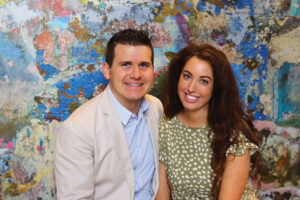